With fewer fluent speakers, demand for teachers of Indigenous languages is on the rise

A trend toward "Indigenizing" programming in schools by bringing Indigenous culture and languages into the classroom has led to a demand for teachers who are fluent in Indigenous languages. But with the number of Indigenous language speakers on the decline, school divisions have had a hard time finding qualified and certified teachers.

"We had some difficulty, looking for Dakota language teachers. Not a lot of people are seeing that as a career," said Kevin Tacan.

Tacan, is a Dakota knowledge keeper, and has been working with the Brandon School Division in Manitoba for 21 years. The school division is in its second year of offering high school courses on Indigenous languages, but they've had a hard time filling the Dakota language position in time for the new year.

"We're trying to bring that self-esteem and confidence back to our youth, because at that age — just a little bit behind puberty — our young people are supposed to be doing their vision quests and ceremonies. Their language is important for those types of things," said Tacan.

"If they don't have those, they're not going to understand the importance of them."

According to census data, the number of people in Canada who spoke an Aboriginal mother tongue dropped from almost 26 per cent in 1996 to 14.5 per cent in 2011, which has led to efforts to revitalize Indigenous languages.

Tacan has been working hard to get the Dakota language taught inside a high school classroom. He is also hoping that more young people take on the role of language revitalization.

"It would be good to see a lot of our younger people who are passionate about the language take the language up and work towards making that a career option," said Tacan.

Tacan said it's important for young people to learn the language in classrooms because it "gives them that opportunity to look at education differently, through Indigenous eyes."

Although the Brandon School Division has had trouble filling the Dakota language teaching position, Tacan said it expects to fill the job by next week.

The demand for certified language teachers

The Michif language highlights a need for a different way of hiring teachers.

In Manitoba, anyone who is teaching high school needs a bachelor of education degree. However, with languages like Michif which are rapidly declining, there aren't many fluent speakers who also hold a degree.

"We've been extremely blessed to have fluent speakers in the community to assist with [finding teachers]."

The lack of qualified teachers who speak languages like Michif has led to the division using limited teaching permits, which the division has to apply for each year. The permits grant teachers special permission to teach without holding an education degree.

Rob Riel is the Winnipeg School Division's director of Aboriginal education and newcomer services. He said the division offers Indigenous language classes in at least five schools within the division.

The school division has been able to find language speakers to teach the classes, but has had a hard time keeping them from moving to other jobs. 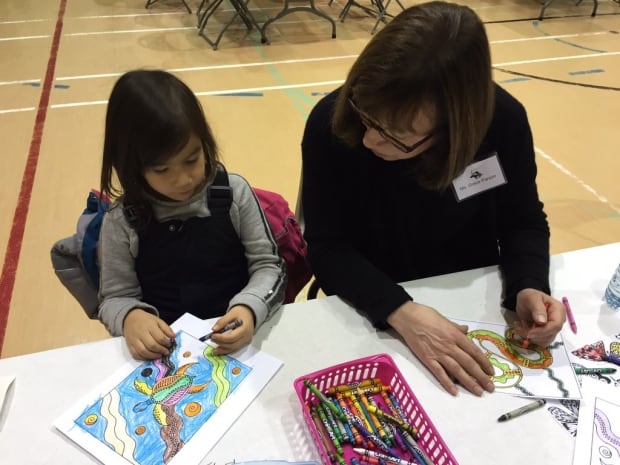 Isaac Brock School is in the second year of it's Ojibway and Cree bilingual language program. Rob Riel would like to see the program extended to older students. (Courtney Rutherford/CBC)

"There's such a need right now for these types of positions because everybody is realizing the strength and enhancements that they can do to their programming and the support that the students can get — and are asking for. So they're in high demand."

In an effort to strengthen Indigenous languages, the Winnipeg School Division has implemented Ojibway and Cree bilingual classes for elementary students at Isaac Brock, a kindergarten to Grade 9 school in the city.

The bilingual program started last year with the first group of students in kindergarten. Riel is hopeful the program will be able to expand to older students in the future.

"Our problem will be getting language people — everybody is gunning for them. They're a very important part what's happening right now in schools, " said Riel.